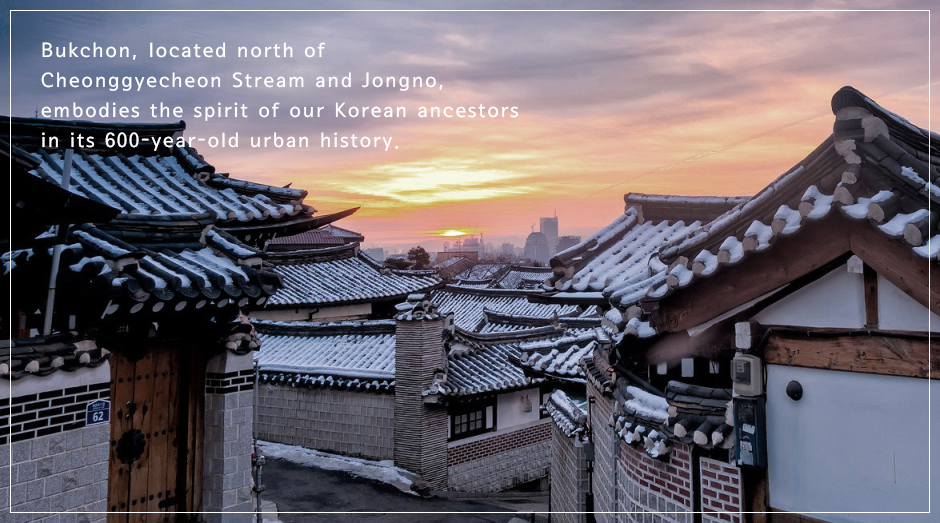 Bukchon was traditionally a residential area of the nobility during the Joseon period, and did not undergo any significant changes until the 1920s. However, in the 1930s, Seoul’s administrative districts were expanded and its urban structure was transformed into its modern appearance. Housing management companies purchased large plots of land, woods and fields and built a group of medium-sized hanok (traditional Korean house) on them. The current hanok residential areas such as Gahoe-dong (#11 and #31), Samcheong-dong (#35), and Gye-dong (#135) were all established at that time.

Bukchon’s hanok were renovated with new materials, such as by attaching a glass door to the daecheong (wood-floored hall) and extending the roof eaves with galvanized iron sheets. Without losing their typical characteristics, the hanok evolved into a new type of urban housing so as to adapt to the modern urban structure.

In general, Bukchon’s hanok were built efficiently with standardized wooden materials provided by a timber mill as a large number of homes was required. On the whole the hanok were established as a new housing type within a new urban environment while maintaining their traditional features.

Bukchon hanok’s characteristics can be defined into two elements – an evolved ancient method and a more decorative tendency. Although they don’t have the same qualities as traditional hanok, as they feature a low roof inclination, a round beam, double eaves and too many kan (a unit of measurement referring to the distance between two columns) within the narrow column spacing, the composition and beauty of traditional hanok are condensed into Bukchon’s hanok. As the sales advertisement for hanok produced at that time show, a new type of urban residence was established by reflecting the need for urban housing to mitigate the density and anonymity of the city. 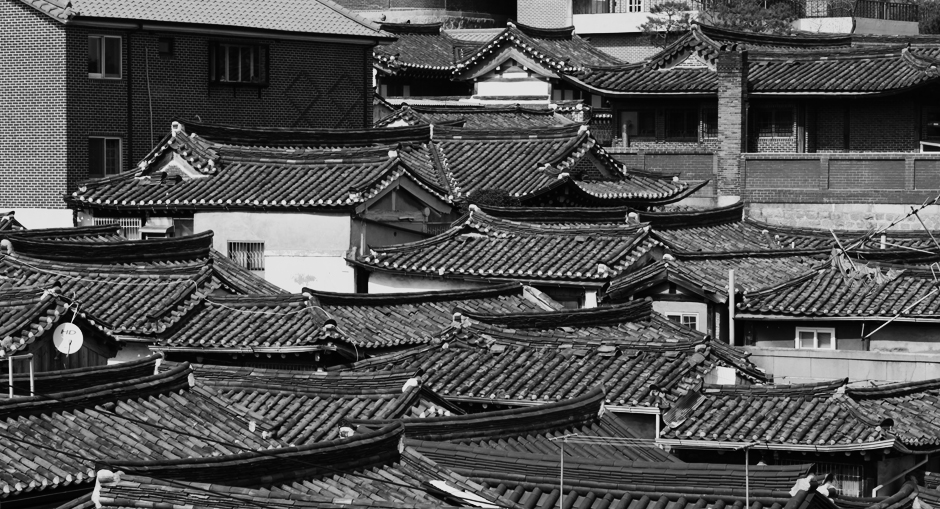 Formation and
Changes of
Bukchon
Regarded as Seoul’s most representative traditional residential area, Bukchon features a cluster of traditional hanok between Gyeongbokgung Palace, Changdeokgung Palace, and Jongmyo Shrine. It is also referred to as a ‘street museum in the city center’ as the area is full of historic sites, cultural heritages, and folklore materials.

Bukchon, or “north village” in English, was thus named because it is located on the upper (north) side of Cheonggyecheon Stream and Jongno. The area consists of Gahoe-dong, Songhyeon-dong, Anguk-dong, Samcheong-dong, Sagan-dong, Gye-dong, Sogyeok-dong, and Jae-dong. Notably, the latter four dong areas have kept their ancient names.

At the end of the Joseon period, large area of land were divided into small housing lots due to social and economic reasons; and it is estimated that the current hanok arrangement – in which the houses stand shoulder to shoulder – emerged in the 1930s. Such changes reflected various social phenomena related to the expanding population in the city center.

Bukchon’s relics and cultural heritages spanning the Joseon and modern periods tell the history of the area to visitors.

Present Condition
As Bukchon is located on the southern foot of a mountain range connecting Bugaksan Mountain and Eungbong Peak, it is well-known as a propitious site according to the principles of Feng-Shui. Its northern area, including Samcheong Park and Bugaksan Mountain, features a dense forest of a kind rarely seen in a city center. In addition, as Bukchon’s northern part is higher than its southern area, it is warm in the winter, has good natural drainage and boasts an open view of Namsan Mountain.

As its northern terrain slopes upward, the depth of the valleys get deeper, while the south is relatively gentle compared to the north.

As its northern terrain slopes upward, the depth of the valleys get deeper, while the south is relatively gentle compared to the north.

Bukchon covers 1,076,302m2 and stretches across Gahoe-dong, Gye-dong, Samcheong-dong, Wonseo-dong, Jae-dong, and Palpan-dong; and is surrounded by Yulgok-ro Street near Gyeongbokgung Palace and Changdeokgung Palace, and Samcheong Park. Designated as a Historic Cultural Aesthetic District, its 1st class residential district urban plan is being established at the moment. Bugaksan Mountain (463m) and Samcheong Park are situated to the north; Gyeongbokgung Palace, the main royal palace of the Joseon Dynasty (Historic Site 117), to the west; and a World Cultural Heritage, Changdeokgung Palace (Historic Site 122), to its east.

The Bukchon area was formed entirely with hanok in the 1960s, although many of them have disappeared since the 1990s due to the construction of multiplex houses. However, a few groups of hanok in good condition can still be seen in certain areas.
Cultural Heritages
in Bukchon
Located between Gyeongbokgung Palace and Changdeokgung Palace, Bukchon is a historic site that was a residential area of aristocrats during the Joseon period.

The Bukchon area also contains traces of old streets and waterways developed in and after the Joseon period, along with a number of historic properties related to the hanok that were rapidly built from around 1900. As shown on Doseongdo (Map of the Capital City, drawn up in 1750), Suseonjeondo (Complete Map of Paddy Fields, 1892), Gyeongseong sigado (Gyeongseong Street Map, 1927), and the current maps of the area drawn up after the 2000s, many roads including Gyedonggil, Gahoe-ro, Samcheongdonggil, and Changdeokgunggil have been maintained in their original form, and thus are also regarded as valuable historical resources.

Furthermore, various galleries are situated around Samcheongdonggil Road on the opposite side of Gyeongbokgung Palace, while distinctive restaurants and coffee shops line Hwadonggil Road. Currently, many traditional handcraft masters and artists live in Wonseo-dong.

These days, architects and artists have been establishing workshops and offices inside Bukchon in order to work amid its historic environment. It is a local phenomenon that is helping to develop Bukchon’s historical and cultural significance and contents.
Residential Area
of Influential Men
in Bukchon
during the
Joseon Period
The most distinctive characteristics of the Bukchon area are its topography and waterway. Bukchon’s terrain is low in the south and rises towards the north, forming four valleys. Streams flow along the valleys, and roads have been built to run southward alongside them, a feature which can be seen in Bukchon’s main north-south avenue consisting of Samcheongdonggil Road, Gahoedonggil Road, Gyedonggil Road, Wonseodonggil Road, etc.

Bukchon is located between Gyeongbokgung Palace and Changdeokgung Palace in the heart of the capital, and extends across the south-facing slope of a mountain range connecting Bugaksan Mountain and Eungbong Peak. Due to its good geographical environment, Bukchon has been a residential area for influential families since ancient times. According to the records of the family register in 1906, the total number of people in Bukchon was 10,241 (1,932 households), of whom 43.6% were nobles and government officials. Thus, Bukchon was mainly inhabited by high-ranking bureaucrats and nobles.
Bukchon of the Japanese
Occupation Period
During the period of enlightenment and the Japanese occupation, Bukchon was largely inhabited by many influential figures of the Enlightenment Party such as Park Yeong-hyo and Kim Ok-gyun, and the Yeoheung Min Clan including Min Dae-sik (a son of Min Yeong-hwi), although it was also a popular residential area among Korean independence activists. The large increase in Seoul’s population during the Japanese occupation aggravated the housing shortage and led to section-type development by the private sector. As housing management companies emerged to make profit from housing sales, from 1912 on various types of hanok were rapidly built by parceling out medium and large-sized plots of lands in order to solve the housing problem. Bukchon’s current representative areas where hanok are concentrated (#31 and #11 in Gahoe-dong, #35 in Samcheong-dong, etc.) were built on a large scale by these companies at that time and supplied to the public. Unlike previous hanok, those built at that time were constructed with new materials such as glass and tiles, had a standardized structure, and were built according to the street system.

Such hanok residential areas continued to be built from the liberation of Korea in 1945 until the early 1960s, and most of those areas became packed with hanok except the large plots of land used to accommodate schools and other public facilities.
Relocation of Schools and
Changes of Bukchon’s Scenery
in the 1970s

Along with the Yeongdong District Development Project conducted between the late 1960s and the early 1970s, when the development of the Gangnam area (southern area of the Hangang River) began in earnest, many of the inhabitants of the Gangbuk area (northern area of the Hangang River) and, as a consequence, many of the local schools were moved to Gangnam. After Kyunggi High School was relocated in 1976, the building was used as Jeongdok Public Library, while Whimoon High School, moved in 1978, was replaced with a 15-story office building built for Hyundai Engineering & Construction Co., Ltd. in 1983. After the relocation of Changduk Girls’ High School in 1989, the Constitutional Court was established on its site. As schools were relocated from the Gangbuk area, large new structures changed the scenery of the Bukchon area.
Rigid Hanok Preservation Policy and
Establishment of
Bukchongil Road
in the 1980s
Along with the development of the former sites of schools after their relocation, the necessity of preserving hanok became a pressing matter. Thus, a hanok preservation policy was carried out in earnest after discussion on the designation of the folk scenery area in 1976, when the fourth class of aesthetic district was designated in 1983. However, the policy was executed mainly by the administrative authority, without any discussion or agreement with local residents, according to a strict hanok control system similar to that applied to cultural heritages. Moreover, many hanok were demolished to expand Bukchon-ro Road. Such an ambivalent administrative operation led to numerous complaints by local residents.
Destruction of Hanok and
Expansion of
Multiplex Houses
in the 1990s
According to the residents’ consistent demands to ease the building standard, the Seoul Metropolitan Government mitigated the building height regulation from one-story houses to houses less than 10 meters high (or three stories) in May 1991, which led to the construction of multiplex houses in earnest. Then, in 1994, when the building height regulation around Gyeongbokgung Palace was eased from 10 meters to 16 meters and a maximum of five stories, and the construction of multiplex houses spread after the demolition of hanok throughout Bukchon including Wonseo-dong, the landscape of Bukchon deteriorated rapidly
New Attempts to
renovate Bukchon
in the 2000s
Due to the destruction of hanok and the rapid construction of multiplex houses, which changed the landscape of Bukchon significantly and caused the residential environment to deteriorate further, a new Bukchon readjustment policy was established together with residents, experts, and Seoul Metropolitan Government at the Seoul Institute, at the request of the Jongno Bukchon Readjustment Association (a residents’ association), in 1999. Based on the hanok registration system - which is performed on a voluntary basis by local residents, unlike the existing unilateral regulation - a policy was elaborated to maintain the unique beauty of hanok and to lead, support and control the necessary repair and construction works, while accepting the need to adapt to the modern lifestyle. Furthermore, the system aims to renovate Bukchon by improving the village environment with residents’ active participation and by enhancing its attractiveness as a residential area. The policy has been implemented since 2001.